Beet Borscht: A Natural Way to Cleanse a Congested Liver

The liver is the major detoxification organ of the body. In light of the unprecedented amount of chemical toxicity which now permeates the food supply and water sources, the average American liver is quite burdened and imbalanced. Often times, the liver will become so congested with “liver sludge” that its major detoxification pathways will become severely compromised. This is when there is a risk of the hepatocytes not working properly, and considering the massive part the liver has in the function of the body, this needs to be avoided.

This problem usually affects the gallbladder at the very same time, especially clogging up the bile ducts. Because the liver and gallbladder are closely connected, when bile flow is slowed down there are several consequences which inevitably occur. A proliferation of gallstones is just one byproduct of a congested liver and/or gallbladder.

No Worries: Beet Borscht to the Rescue

“The beet mobilizes the liver like perhaps no other food and in so doing moves gallstones, hardened bile, accumulations of cholesterol, calcified “liver gravel”, chaff and other waste products through the bile ducts and into the GI tract. In this way these unwanted detoxification byproducts can be permanently expelled from the body.”

Beets are an extremely hardy root vegetable and probably derive their extraordinary capacity to function as a veritable roto rooter from their growing cycle in the rich and sometimes hard soils of the Northern states. Here’s where they are grown across that geographic area:

The key point here is that beets are one tough vegetable which is exactly what is needed to keep the liver naturally purged of so much hardened bile and so many gallstones. As a matter of fact, cutting beets to make your favorite beet borscht recipe can be such a drill that a food processor is the most practical way to do the job efficiently.

There is some interesting history regarding beet borscht that brings us to the famous Borscht Belt of the Catskill Mountains in New York State. This famous resort and summer vacation area became well known because all the big hotels routinely served their own special versions of beet borscht. The great majority of those who spent their holidays there originally emigrated from the Ukraine, Russia, as well as Eastern and Central Europe. They brought their preferred and indispensable recipes with them since they knew their robust health was due in great part to favorite beet borscht. 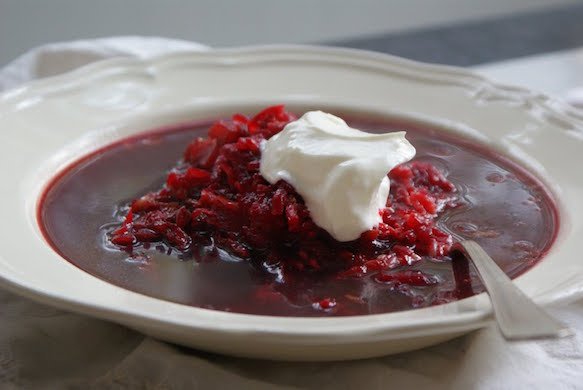 Ayurveda Sings the Praises of the Regular Dietary Intake of Beetroots

“Beetroot is a rich source of Betaine, a natural liver detoxifier and bile thinner. The average liver of people living on processed foods contains hundreds of gallstones, little gall pebbles that can clog up the e bile duct and impede the flow of bile. Beets are one of the best ways to promote the movement of gallstones towards the bile ducts and out of the liver.” [1]

For those who do not like eating their beets, not only are they excellent for restoring liver function, they also serve many other vital health purposes as put forward on Alpha Wolf Nutrition, amongst other nutrition websites. Because beetroots are so rich in folic acid, they offer significant benefits for the female reproductive system, and are particularly utilized for uterine disorders.

Other health benefits of beets include:

– Beets help to clean the blood and are useful in treating anemia. They are a source of foliate and hence help to build red blood cells

– Beets are a high source of betalain — a phytonutrient providing antioxidant and anti-inflammatory properties.

– Beets contain lutein and zexanthin, both of which help prevent macular degeneration. [1]

However, it is the liver and gallbladder which will receive the most important benefits from a regular dietary intake of beets. When combined with the many other ingredients found in a typical beet borscht recipe, it becomes a valuable health tonic far surpassing any power drink or superfood. The different recipes are all heavy in the same basic ingredients and serve to supercharge the borscht in case you prefer to just squeeze it and drink the broth. 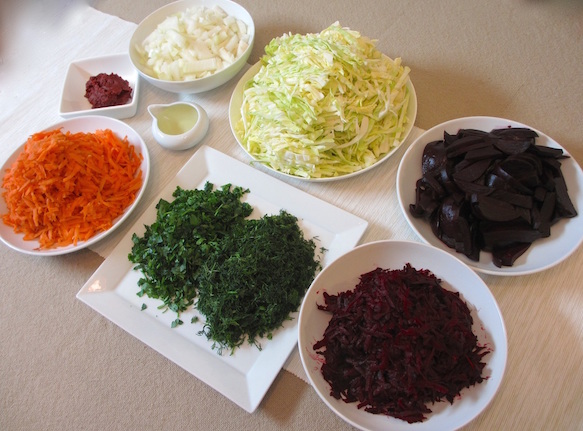 Here’s an excellent recipe that has all the right stuff to function as a gentle yet very effective root rooter for the liver.

(Sauerkraut can be substituted for cabbage and apple cider vinegar.)

*Substitute Malanga for potato for those with Nightshade sensitivity

“Chop onions. Slice potato, carrots, beets and cabbage thinly. Place all ingredients in a pot and cover twice the height with water. Bring to a boil and simmer, covered, for one hour of more. Variations include garlic and parsley.”

Eating beet borscht on a regular basis keeps the liver cleaned out and free of congestion. The body is able to naturally slough off many of the toxic residues and unwanted chemicals from a diet rich in beetroots. Drinking beet juice mixed with other freshly squeezed vegetable juices can also serve the same purpose, but can be quite intense for some.

For those who suffer from gallbladder attacks or chronic liver pain, it may be advisable to perform a gallbladder flush and/or liver cleanse. These highly effective detoxification protocols will be taken up in a follow-up article.